Plant trees, sure. But to save the climate, we should also cut them down

Democrats have set their sights on passing major climate legislation, but with a razor-thin majority in Congress, they need to look for common ground with Republicans.

One of the most promising ideas is to plant a vast number of trees — and also to cut them down.

President Joe Biden has announced an ambitious goal of net-zero emissions by 2050. That would mean switching to renewable energy, expanding public transit, retrofitting buildings, and a host of other policies to slash greenhouse gas emissions. But even in the best-case scenario, it won’t be possible to eliminate all emissions. The idea of “net-zero emissions” is that any remaining emissions can be fully offset by so-called “negative emissions” — methods of sucking carbon out of the atmosphere. 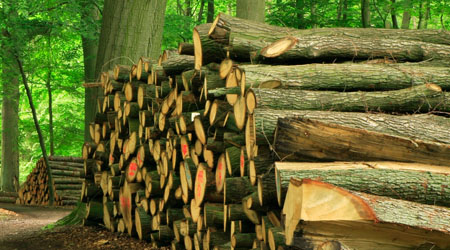 Planting trees is the most straightforward way to do that. Trees absorb CO2 for photosynthesis and store it as cellulose and lignin, the main components of wood. Planting trees may also be the most popular climate policy. Even former President Donald Trump loved the idea. He championed an international initiative to plant 1 trillion trees, which would be enough to soak up at least a decade of global emissions. When Republican Rep. Bruce Westerman, a professional forester, introduced the “Trillion Trees Act” last year, he was joined by a bipartisan group of co-sponsors that included House Republican leader Kevin McCarthy. Fossil fuel air pollution causes almost 1 in 5 deaths globally each yearAccording to the World Resources Institute, the US alone could add 60 billion new trees to deforested lands, agricultural or urban areas, and sparse eastern forests that aren’t prone to wildfires. Forests in the western US, on the other hand, are prone to wildfires, and that calls for putting down the shovel and reaching for the axe. Wildfires turn trees from asset to liability. Last year’s record blazes in California belched twice as much CO2 as the entire state’s power plants. It’s one of the terrible feedback loops of climate change, where wildfires beget more wildfires. To break the cycle, it’s often necessary to sacrifice individual trees for the good of the whole forest. If large trees are packed densely together, flames can spread easily between them, so “selective thinning” can reduce the risk of large fires. The same goes for small trees, which can act as “ladder fuel” by transmitting fires from the forest floor up to the treetops. Dead trees that are still standing, dried out like matchsticks, pose another fire hazard that can be neutralized with chainsaws. Read more on CNN.com:  https://edition.cnn.com/2021/02/10/opinions/climate-plant-and-cut-trees-down-bader/index.html